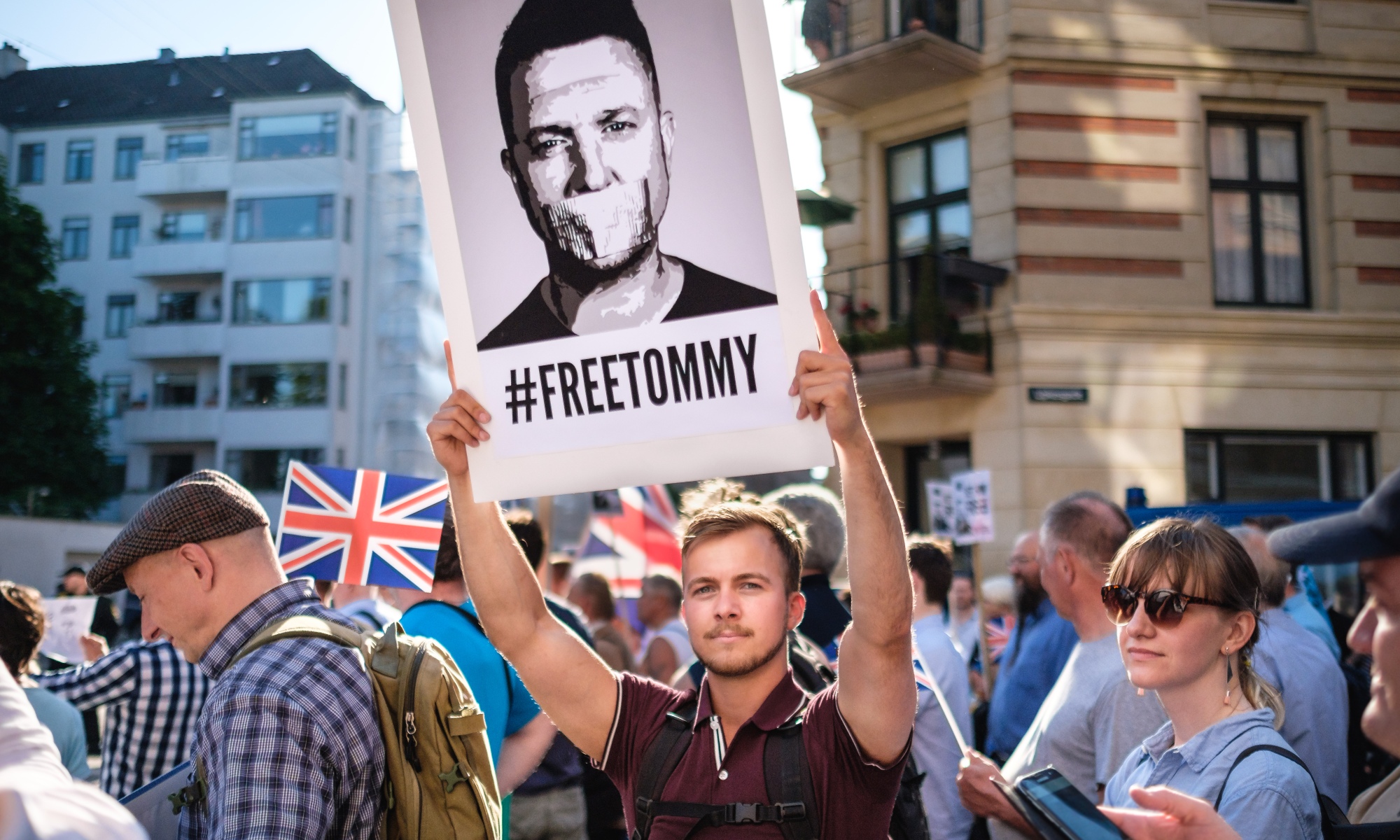 Tyler Walsh argues that we live in a time of excessive political correctness, contending that people such as Tommy Robinson, Sonia Kruger and Lauren Southern have been on the receiving end of policing of opinion.

This article was first published in our 2018 print edition.

One of the things that I admire most about Western civilisation is that we are free to express what we believe without fear of persecution by authority or society. It is evident that this fundamental freedom is rapidly being lost in our society today. I believe that we currently live in an era of excessive political correctness and policing of opinion.

Take the example of last year’s national postal vote asking Australians “Should the law be changed to allow same sex couples to marry?”. Both sides of politics campaigned hard for and against this cause; the ‘Yes’ campaign sent text messages nationwide via an SMS bot as one of their strategies, while the ‘No’ side broadcasted advertisements to promote their side on national television.

I think both sides of this campaign were guilty of attempting to silence and shut down their opposing side. However, I noticed in particular that the Coalition for Marriage, the leading force behind the ‘No’ campaign, were attacked and falsely accused of being hateful fear-mongers who were simply homophobic.

These days, you can just stick ’phobia’ at the end of any word to as a reason to silence someone. NSW Senate candidate for the Australian Conservatives Kirralie Smith says that “The gay lobby are never satisfied and seem to be the biggest bullies going around!”2

This is just one of many examples of freedom of speech being lost in society. It doesn’t matter if you are in the online world or the real world; your thoughts are susceptible to being attacked. Nobody is immune to being silenced by a higher power.

The thought police are already in full effect in the United Kingdom. A few months ago, Tommy Robinson was arrested for “breaching the peace” outside of Leeds Crown Court. Robinson was filming a live broadcast of himself reporting on a trial taking place inside the court regarding ten Muslim men who were being charged of alleged sexual assault. Robinson’s live stream was brought to an abrupt halt as he was handcuffed by police and escorted to the back of a paddy wagon. A court order was in place by the judge presiding over the Muslim grooming case which restricted reporting regarding the details of the trial6, hence Tommy Robinson was charged and imprisoned for a short term for contempt of court.

The fact that Tommy Robinson does not have the freedom to report on pending court matters isn’t the big issue here. In fact, it is understandable why reporting restrictions exist on matters where the defendant is yet to be proven guilty. According to Judge Heather Norton, “this is not about free speech, not about the freedom of the press, nor about legitimate journalism, and not about political correctness. It is about justice and ensuring that a trial can be carried out justly and fairly, it’s about being innocent until proven guilty. It is about preserving the integrity of the jury to continue without people being intimidated or being affected by irresponsible and inaccurate ‘reporting’, if that’s what it was”.7

The greater problem with this case was a separate court order preventing the media from reporting on Tommy’s arrest and sentencing. Many people in the UK saw this as an attempt made by the establishment to silence right-wing activists by stealth and keep their citizens in the dark.

The UK seems to be so scared of criticising the ‘religion of peace’, they even banned Canadian political personality Lauren Southern from entering the country for alleged racism. As part of a social experiment, Southern distributed flyers in the UK satirically claiming “Allah is a Gay God” which resulted in her ban.4 As we all know, Islam is a religion not a race, therefore her stunt cannot be considered racist. It appears that the UK authorities were simply looking for an excuse to ban Lauren Southern in order to shield a minority group of people from being criticised. Fortunately, she wasn’t banned in Australia during the national tour she did with Stefan Molyneux in July this year. I still managed to meet her without the Australian Government intervening!

Speaking of free speech being misinterpreted as racist or hate speech, some politicians advocated for reform to Section 18C of the Racial Discrimination Act last year. Part of the reason for modifying this legislation was because words such as ‘offend’ were too restrictive on personal freedoms, since offence is taken not given. Unfortunately, the proposed changes to 18C were not passed by federal parliament. There have been two notable lawsuits in recent times where this legislation was abused to restrict freedom of speech; the QUT case and the Sonia Kruger case.

In 2013, Queensland University of Technology student Alex Wood unknowingly walked into an Indigenous Computer Lab and was asked to leave. Wood later posted in a Facebook group “Just got kicked out of the unsigned indigenous computer room. QUT stopping segregation with segregation?”.

Alex Wood and two other students from the university who commented on Wood’s post were sued by Indigenous staff member Cindy Prior for $250,000 worth of damages and were not aware of this legal action being made against them until 2015. Fortunately, Prior was advised by a federal court judge to not proceed further with this case, hence the charges were dropped.5 Although the defendants were not charged, this case should not have proceeded this far in the first place. The proceedings would have placed a considerable amount of stress on Wood and the other defendants; all over an opinion on Facebook. Liberal Senator for Victoria James Paterson says “This shows callous disregard for the welfare of three innocent students whose lives have been damaged by a tortuous three and a half-year case.”5

In regards to Sonia Kruger’s case, she stated on the Today show in July 2016, shortly after the Nice terrorist attack, something to the effect of that she would like to see Australia stop Muslim immigration because of fears of public safety. Kruger also mentioned that she supported Andrew Bolt’s comments regarding a correlation between the number of Muslims in a country and the number of terrorist attacks. A racial vilification complaint was made against Kruger and she faced a hearing in the Civil and Administrative Tribunal in June this year.1

I don’t know how that complaint could have possibly resulted in a hearing, since ‘Muslim’ is not a race. As I am writing this paragraph right now, on the 16th of September 2018, I hear the news that a friend of Israeli-Australian political activist Avi Yemini was murdered by an Islamic terrorist. Kruger’s comments are relevant to the society we are living in today, and we shouldn’t have to tread on eggshells to say what needs to be said. Both Wood and Kruger’s cases were unjust, in my opinion, because they were punished for reasonable and rational opinions.

On the internet, it may be apparent to some that the social media giants are part of one monopoly dedicated to protecting the ‘anti-free speech’ thought contagion. Apple, Facebook, Spotify and YouTube all banned the American right-wing media platform InfoWars within 12 hours of each other in July this year. No specific examples were provided to InfoWars to explain the reason for the bans.

InfoWars editor-at-large Paul Joseph Watson believes this clearly suggests ‘big-tech’ collusion and proves that their (Facebook, YouTube etc.) terms of service are all bullshit.3 Some people may argue that these companies have the right to exclude whoever they want from their platform, as part of their right to exercise free speech against those they are banning from their platform. Paul Joseph Watson quickly debunks this argument by stating that these big-tech companies have monopolised free speech online (you can watch the full video released by Paul Joseph Watson titled ‘The Purge’ on his YouTube channel).

Avi Yemini was also recently ‘zucked’ for alleged hate speech, and he also received no information on what content he was specifically banned for. His Facebook page with over 150,000 likes was deleted without warning; he has since created a new page, but this has only attracted around 8,000 likes as of August 2018. Avi Yemini is planning to run for Victorian parliament as a candidate for the Australian Liberty Alliance at the next state election. Losing over a year’s worth of content and 142,000 followers will have a harmful effect on his political campaign. Facebook, an American social media company, has effectively interfered with Australian politics and damaged the campaign of the Australian Liberty Alliance by imposing this ban. This sets a dangerous precedent for political candidates and parties worldwide to have their success taken away from them by Silicon Valley.

I could rattle off with more examples and scenarios, such as the recent satirical cartoon of Serena Williams, and Dr. Quentin Van Meter and Patrick J. Byrne’s proposed speaking event that was scheduled to take place at UWA, but there is only so much you can fit in 1500 words.

I encourage you all to take the time to think about where the world is heading as society controls the speech of its citizens more and more. Although my examples have favoured the right side of politics, the left have just as much of a right to freedom of speech. This includes Queensland primary school student Harper Nielsen, who became recently infamous for refusing to stand for the national anthem. Although she has a right to oppose the national anthem and declare her beliefs, refusing to stand and refusing to leave the room does take it a step too far since this disrupts other people in the room proudly standing and singing the national anthem.